A Stress Analysis of a Strapless Evening Gown – Neatorama.

Could professional sports teams stop with the Navy Blue? this is a color that is only (and even then just barely) valid on actual Navy uniforms, and possibly, just possibly, yacht club blazers. it does not belong on the field, except maybe, (under extreme circumstances,) as an accent color.

Damnit, I want my Patriots in Red and my Seahawks in bright Green!

note to self… when making pocket flaps, sew the buttonholes before you attach the flap to the pants…

how does one put a brim on a cap. 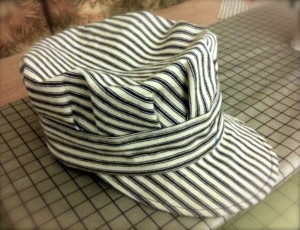 the basic idea is that of constructing a cone.  but the simple answer is to construct it mostly like a collar. trace the curve on the flat and then extend or shorten the outer edge by cutting and spreading.

one tool that I’ve found invaluable for making hats is a profile copier, (or ‘contour gauge’ if you want to google it.)  if you get the lightweight plastic variety, they don’t hurt as much as you press them against your head. (the wire ones can be a bit ‘sharp’…)

anyway, once you get a perfect profile of your head at the level you wish your hat to sit, you can trace it out onto cardboard and cut it out. providing the cutout fits your head perfectly, you’re golden. if not, adjust until perfect.  then gild that template, you can use it for everything. secondarily, measure over the top of your head from front to back and side to side. notate the measurements on the gilded cutout disk that you now have for your head pattern and you pretty much have everything that you need for making pieced hats in the future.  (by pieced, that is stitched material, leather, twill etc., rather than shaped felt…)

anyway, if you trace that profile onto a material and cut it out, you will end up with a hat with a flat brim. most hats have a bit of an arced brim. the arc is defined by whether the hole is made narrower (left to right) or shorter (front to back) than the original hole. classically, if you are looking at things like western hats, you have those two choices. if you want the front of the hat to come down to a point in front of your face, you make the hat a little wider but shorter than the head profile. that way you have to pull the front and back of the hat out to fit the head. causes the front and back to dip and the sides to rise. but the folds tend towards the front and back. if the hat is constructed to be longer but narrower. causing the fold of the front brim to fold down crosswise across the eyes. the former is far more common than the latter.  best to work out the curve you want with some thick paper or thin cardboard before you commit to actual hat samples.

so, in this case, the brim is made a bit wider but shorter.

another way to think about it is that for a flat brim, you use the precise head profile, and for a vertical brim you use a straight line for the back edge of the brim.  what you probably want is somewhere in between. actually you can probably mix and match a bit.  this might require some experimentation…  I may have to get back to you on that.  diagrams to follow at a later date…

adding to the list of ephemera that have a greater effect on the world than most people would credit is the nature of modern tailoring to enforce a sedate and restrained presence.  most modern clothing is engineered to prevent you from raising your arms.  the ‘line’ or ‘drape’ of the clothing is ‘ruined’ by over exerting. END_OF_DOCUMENT_TOKEN_TO_BE_REPLACED

Odd thing of interest probably only to me. Levis 501 jeans conform exactly to standard victorian era pants design. Except on the matter of which side does one “dress”, which the Levis leave open to interpretation…

Sports uniforms are a bit of a pet peeve for me. I feel that for every professional sport there are a few conventions that define the look of a player of a given sport that define that particular sport so well that it’s more than a little jarring when these standards are contravened.  For example, shorts in hockey, stirrups in baseball, etc..

NFL uniforms are curious in that until recently the jersey’s were generally void of obvious team logos or names. Even the numbering wasn’t particularly distinctive until the last 20 years or so. There wasn’t much to separate a college uniform from a pro uniform. Even between pro uniforms there were only the colors and the distinctive striping.  Famously the Cleveland Browns and the Cincinnati Bengals had nearly identical uniforms due to a long running feud between the owners.  It’s the striping that I’m annoyed about today, specifically the shoulder stripes…