well, char… or bio-char as it is now popularly known.

fairly simple process as it turns out. what you basically need to do is to have a nearly sealed fireproof container that contains the wood you want to convert to charcoal and you need a heat source to cook it. handily one of the by products of cooking wood is a bunch of flammable gasses, and the quicker amongst you can probably already see where this is going.  the trick is to direct the gasses into the flames that are heating the soon-to-be-charcoal. the simplest  way that I’ve found so far is described at the New England Biochar website.

it breaks down to the following steps. 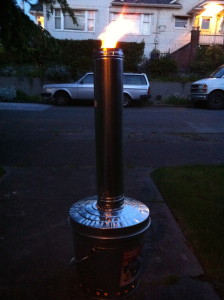 basically what happens is that the outer layer of fire heats the inner bucket. inside the inner bucket the wood cooks, releasing quite a large amount of flammable gas, this gas seeps out the inner bucket, and is ignited by the already burning wood to further heat the now toasty warm wood.  eventually, the fire burns itself out.  it’s very important to wait until the inner bucket cools down before opening it. the smoldering wood might suddenly catch fire.  that’s what I’m waiting for now.  more news later…